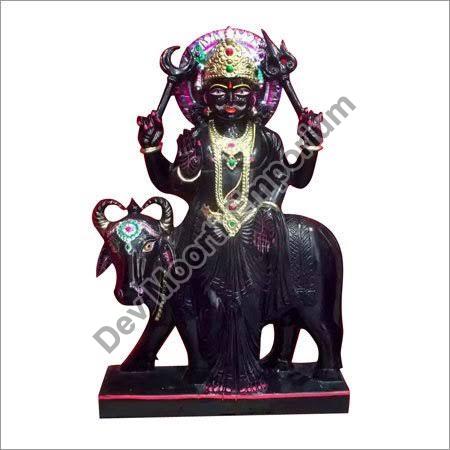 Shani is a male Hindu deity in the Puranas who is shown as a dark person seated on a Crow, with a sword or danda (scepter). He is the deity of Karma (actions), justice, and retribution, and he determines one's fate based on one's thoughts, words, and actions (karma). Shani Dev is said to be pleased when the Shani Yantra is worshipped on Saturdays. Also, take precautions and purchase your Shani yantra from a reputed Marble Shani Dev statue manufacturer. Not doing so, may result in severe dosha. On this day, people can also observe a fast or donate. On Saturday, offer Urad dal or sesame to a black cow to pacify Shani Dev. On this auspicious day, you can also feed the poor. Shani Dev, the Sun God's son, is said to reward or punish people based on their actions in Hindu mythology. If you suffer from Shani Dosha, then worshipping this marble statue of Lord Shani Dev would certainly help you overcome it.