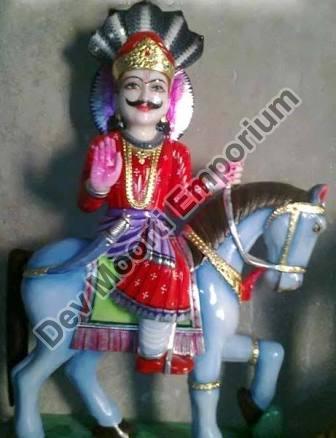 Gogaji, also known as Goga, Jahar, and several other names, is a folk god. He is a regional warrior-hero who is revered as a saint and a "snake-god."

Although Gugga is mentioned in Rajasthani tradition, nothing is known about him other than the fact that he controlled the little kingdom of Dadrewa (in modern-day Rajasthan) and was a contemporary of Prithviraj Chauhan.

Because Goga's past is rooted in folk religion, his adherents come from all walks of life. Goga is revered as a Devta who protects his devotees from snakes and other nefarious creatures. He has been worshipped in the Western Himalayas since the seventeenth century, presumably as a result of migration from Rajasthan. Having a Marble Jaharveer Gogaji Statue at your home will keep you away from mishaps and ailments.